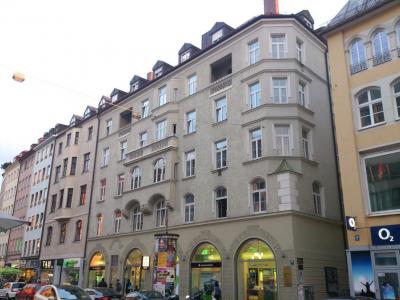 The Sterneckerbräu was a brewery in Munich. The associated inn served as a meeting place for the first branch of the German Workers' Party (DAP) and, similarly to the Bürgerbräukeller, was a place of pilgrimage for the Nazi movement. The DAP members met once a week in the restaurant on the first floor of the building. On 12 September 1919, Adolf Hitler attended a DAP gathering on behalf of the intelligence command of the army, which took place in a meeting room of the Sterneckerbräu, and was invited to join the party. He accepted the invitation and, on that date, became the DAP's 55th member.

In October 1919, the first branch of the DAP was set up in a side room of the Sterneckerbräu. Later, in February 1920, it changed the name to the National Socialist German Workers' Party (NSDAP). In 1921, the Bavarian nationalist and royalist league In Treue fest was founded at the Sterneckerbräu. It was banned by the Nazis on 2 February 1933, and was re-established in 1952.

On 8 November 1933, Hitler opened the Museum of the Nazi Party at the Sterneckerbräu, which was also mentioned in the Baedeker. The first inventory and office furniture, as well as the members' rooms, can still be viewed here.

The building survived World War II. In 1957, the restaurant was closed and the first floor was converted into a store. The building is now used as a residential and commercial property, and is a registered monument on the Bavarian monument list.
Image by Andrew Mager on Wikimedia under Creative Commons License.
Sight description based on wikipedia