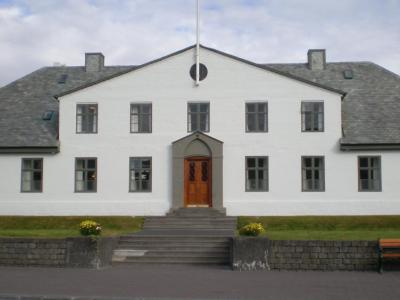 The Government House is a magnificent building in Reykjavík . It houses the Prime Minister's Office. The building was originally built as the first dungeon in Iceland, from the middle of the 18th century.

The first known source of speculation about the construction of a penitentiary in Iceland is in a letter from Henrik Ocksen, the district commissioner, to the district commissioner Joachim Henriksen Lafrenz, in the year 1733. Katrín Ingjaldsdóttir had been sentenced to death in Iceland but pardoned by the king, who commuted her sentence in life imprisonment. Such pardon was not uncommon. As there were no facilities in the country to keep prisoners for life, prisoners were sent to Denmark for imprisonment.

On March 20, 1759, the King of Denmark finally issued a ruling on the need to build a penitentiary in Iceland. Construction of the house began in 1761, and the convicts then served their sentences by working on its construction. The house was ready for use a decade later, in the winter of 1770–71. For the construction and operation of the penitentiary, a tax was levied on real estate and cowardice for detention, and was unpopular with the general public. The penitentiary was closed down in 1816.

In 1904, the first Icelandic ministry took office in the building, and later the cabinet, after which the building was named, in 1918. Since then, the offices of the Prime Minister and the Government of Iceland have been working in the building. The office of the President of Iceland was housed in the Government House from 1973-1996. The Icelandic national flag was first hoisted at this building.
Image by Guðmundur D. Haraldsson. on Wikimedia under Creative Commons License.
Sight description based on wikipedia