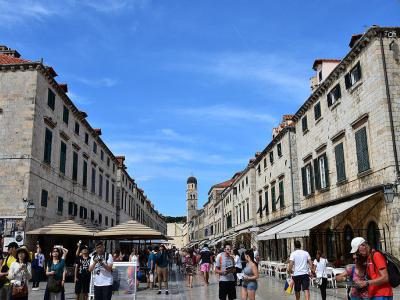 Stradun is the biggest and longest street in Dubrovnik. Stretching through Stari Grad (Old Town) for 292 meters, it has been the city's main thoroughfare since the 13th century; its current appearance, for the most part, was created following the devastating 1667 earthquake in which most of the buildings in Ragusa (as Dubrovnik was called back then) were destroyed.

Prior to the earthquake, houses along the street were not so uniformly designed as they are today – many of them featured arcades and elaborate decorations. Following the earthquake and a large fire that broke out immediately afterwards, the Republic of Ragusa passed a law which specified the layout of all future residential buildings in the city.

Today, Stradun remains a commercial, entertainment and spiritual center of Dubrovnik. As the main walkway of the Old Town, its marble pavement is lined with numerous restaurants, bars and small shops catering to the needs of multiple tourists.

Why You Should Visit:
A really nice, fast way to get from one end of the Old Town to the other – you'd only wish Venice had a central concourse like this!
Also, if you're a cat lover, you'll get to see plenty of lovely cats around this area.

Tip:
Check to see when the cruise liners are in and try to avoid those days to visit, as it may get very crowded.
Do slip off down some of the narrow side streets: not only are they quieter, but also a lot cooler. And food & drink there are considerably cheaper, too.
Image Courtesy of Wikimedia and Richard Mortel.