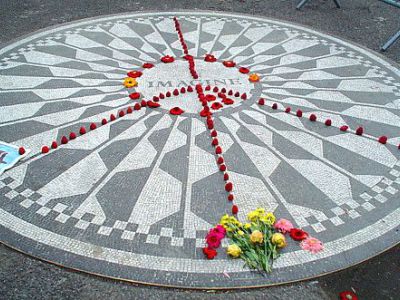 A place of pilgrimage for Beatles fans the world over, Strawberry Fields – named after the famous song – is a deliberately informal and often crowded section of Central Park. It is located right opposite the Dakota apartment building where John Lennon lived and where he was murdered in 1980.

Dedicated in 1985 on the 45th birth anniversary of John Lennon, it provides a bit of solace to all who visit. On a normal day, you will see people placing flowers and candles, guitarists singing Beatles tracks, with most everyone singing and joining in, or simply taking a moment to reflect.

The site's prominent feature is an intricately designed – though rather subtle/unassuming – black and white mosaic given as a gift by the city of Naples, that bears the word of Lennon's song: "Imagine". The memorial is shaded by stately American elms and lined with benches. Go early if you want good pictures.

In warmer months, flowers bloom all around the area, turning it into a favorite spot for picnickers. Along a path, there's also a plaque listing all countries that endorse Strawberry Fields as a "Garden of Peace".

On Lennon's birthday, October 9th, and on the anniversary of his death, December 8th, expect to find a huge crowd of Beatles fans who gather to sing songs in his memory late into the night.

Tip:
The Dakota Building where John Lennon lived and was later murdered is just outside the park entrance nearest the memorial (at 72nd Street), so you can pass there, too.
Image Courtesy of Wikimedia and Timsan79.