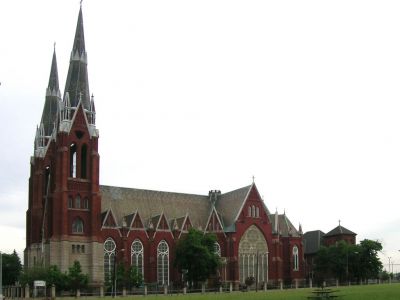 Sweetest Heart of Mary is one of the largest and perhaps most impressive Gothic Revival Cathedral Churches in the Midwest. The church is constructed of red brick in a cruciform shape with a cross gabled roof. The facade on Russell boasts a rusticated stone lower level with a triple portal, a pointed arch structure, and a stone balustrade atop everything. Two towers flank the entrance, topped with identical Spires, which are capped with buttresses and detailed with crosses.