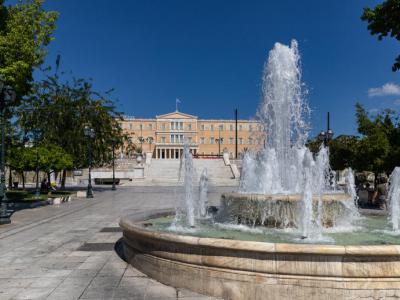 Syntagma Square is a large public square located in front of the 19th-century Royal Palace, that houses the Greek Parliament since 1935. The square is named after the Constitution that Otto, the first King of Greece, was obliged to grant to the Greek people, after a popular and military uprising in 1843.

The square is now a bustling destination located near many major tourist attractions and connected by many busy roads. It is also a major transportation hub where trams, buses, and the subway take people to several important destinations in and around Athens. At the same time, the square remains an important venue for public meetings and political demonstrations.

Syntagma Square is laid in two levels, with the Eastern part being higher than the Western. There is a fountain at its center and several benches where visitors relax or use free public WiFi internet. There are two green areas with pine and orange trees as well as cafes that offer refreshments. The city has recently renovated the square with white marble and new lamp posts. The fountain and benches around it have also been restored. You'll probably find yourself in this square at some point as it's so central and is also one of the most common meeting points.

Why You Should Visit:
Undoubtedly the most important square of modern Athens from both a historical and social point of view, it sits at the epicentre of commercial activity and Greek politics.
You will probably find yourself in this square at some point as it's so central, connects many places and is also one of the most common meeting points.

Tip:
At the bottom of the square is the beginning of Ermou Street, the main shopping street of Athens filled with different stores and a flea market to browse around.
Image by dronepicr on Flickr under Creative Commons License.