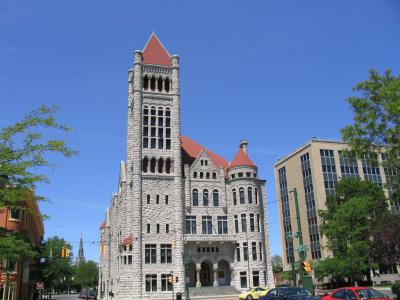 Syracuse City Hall has an unusual design for a civic building. It was designed in the Romanesque Revival style by architect Charles E. Colton and was built between 1889 and 1893 using Onondaga limestone. The building has a 165-foot-high bell tower. There was some controversy regarding the bell, as the mayor wanted to use the bell from the original city hall that was demolished in order to make room for the new building. The architect opposed this idea, and the mayor decided to fire him. The mayor won out and the bell from the original city hall was in use until 1939, when it was removed, melted, and used to help the war efforts during World War II. In 1977 City Hall was renovated. A decade later, an electronic carillon was installed in the tower along with a decorative, brass-plated, aluminum bell.
Image by ZeWrestler on Wikimedia under Creative Commons License.