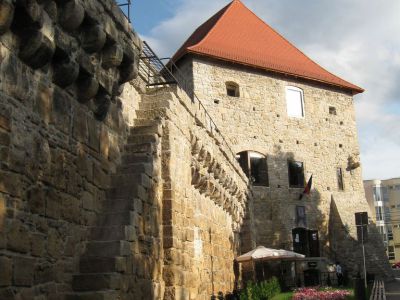 The Cluj-Napoca Tailors' Tower is located at the southeast corner of the old Cluj-Napoca citadel. It was built in the 15th century and rebuilt between 1627 and 1629, taking its present form. It was named after the Tailors' Guild, who took care of and guarded this part of the city. Near the tower — where Baba Novac, general of Michael the Brave and Saski priest, was killed in 1601 by General Basta — there is a statue of Baba Novac. Deserted until 2007, the municipality of Cluj-Napoca undertook to include the tower in the city's touristic itinerary, financing its restoration. The tower will become a Centre for Urban Culture, based on a project offered by the Transylvanian Branch of the Architects’ Chamber of Romania in collaboration with BAU (Birou de Arhitectura si Urbanism). The Centre will host an exhibition space on the ground floor, as well as a library and a conference room on the upper floors.
Image Courtesy of Wikimedia and Cluj Napoca.
Sight description based on Wikipedia.