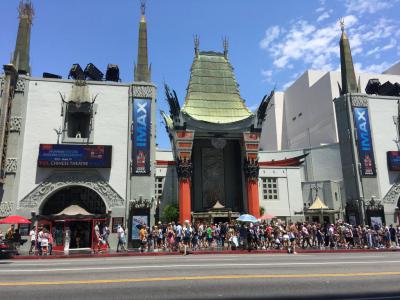 The theatre owes its Chinese design to Raymond M. Kennedy, while Jean Klossner created its forecourt. The building appears in the form of a giant pagoda with a huge dragon in bas relief over the wonderfully decorated front doors, complemented by tiny dragons featured on the copper roof, and two beautiful Ming Heaven Dogs standing guard on each side of the entrance.

The theatre was opened in 1927 with Cecil B. de Mille’s silent epic “King of Kings”, and has since been the choice venue for the premiere of many great films, including “Star Wars” in 1977. Its interior is decorated in red and gold, with Chinese art and statues; the red curtains in front of the screen have delicate golden trees and birds printed on them.

In the forecourt, you will see over 200 signatures, hand- and footprints, and even pistol prints (from Roy Rogers’ pistols) and hoof prints from Trigger! There are several stories surrounding the origin of the prints: Sid Grauman said he’d accidentally stepped into the wet concrete and then decided to invite superstars Mary Pickford and Douglas Fairbanks (some of the theatre’s backers) to do the same. Today you can see here the imprint of Harry Potter’s magic wand, as well as those of Hermione Granger and Ron Weasley, among others.

Tip:
There is no charge to walk around and take photos – you only pay for the movie-going experience and guided tour.