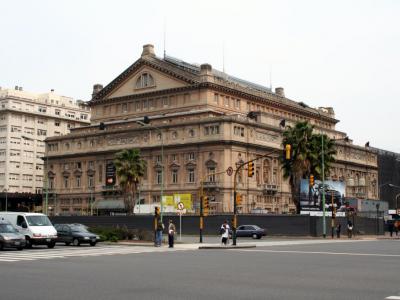 The Teatro Colón or Columbus Theatre in Buenos Aires is regarded as one of the finest opera houses in the world. It took several years and many architects to complete the structure but the result was an architectural masterpiece.

The flourishing operas performed by touring companies in Buenos Aires resulted in the construction of the first Teatro Colón in 1857. It flourished for 30 years. It soon became clear that a new and larger venue was needed because of the increasing popularity of opera in the city. After a 20 year construction period, the present Teatro Colón opened in 1908 with the performance of the opera, Aida.

The present structure was made with carefully selected material from Europe. It was decorated with several different Italian marbles, French stained glass, mosaics from Venice and Slavonic woodwork. The main hall is horse-shoe shaped and can seat over 2,500 spectators. There are four levels of galleries and an additional standing space for a thousand spectators. The orchestra pit can host 120 musicians. The acoustics are near perfect causing the great tenor, Luciano Pavarotti to describe it as one of the most challenging halls in the world where even the slightest mistake can be easily detected. The dome has a hidden gallery for a choir to give a dramatic effect as if angels are singing from the skies.

Why You Should Visit:
The acoustics are magnificent and attending an opera here is a great idea. With sculptures, marble, gold leaf, stained glass windows, artwork, and ornate chandeliers the building itself is just beautiful and well worth a visit.

Tip:
Several tours are conducted daily in different languages, so inquire at the box office.