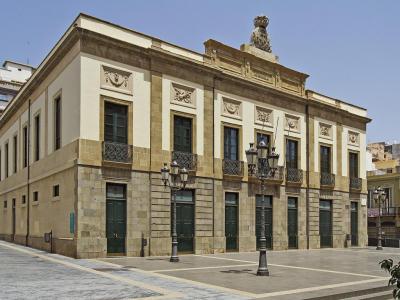 Teatro Guimerá is the oldest theater in the Canary Islands.

Founded in the 19th century. The first known as Teatro Municipal de Santa Cruz de Tenerife, first built in 1849 by the architect Manuel de Oráa and in classical-romance style, it was first opened two years later on January 1851, it underwent several works in the interior decoration in 1888 and other occasional improvements in 1895, 1899, 1901, 1905 and in 1908 and accommodated largely in the ending of the conclusion of the original project of Oráa.

It underwend important works of modification in 1911, headed by Antonio Pintor, and it took two years to complete. These works saw a total renovation and the structute as well as the outside of the building were intact. Since 1923, after the death of Ángel Guimerá, the theatre was named in honor of a Tinerfeño dramaturgist.

The building which had been done for 150 years, the theatre provided many actors and actresses, ballets, orchestras, musical companies, congresses have taken place. Between these events it forms a part of the Canary Islands Music Festival.
Image Courtesy of Wikimedia and Koppchen.
Sight description based on Wikipedia.