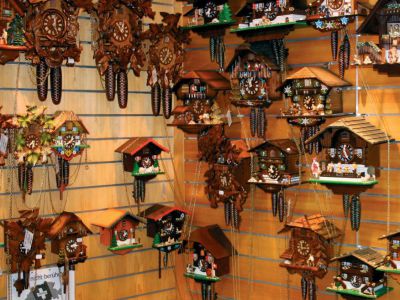 Everyone loves the adorable cuckoo clock and anticipating the tiny bird’s signal that the hour has struck. Though most people may believe that the cuckoo clock is a German invention, the Swiss have contributed their own special version of the clock’s design.

Swiss cuckoo clocks differ from the German variety in that they resemble a traditional wooden Swiss chalet. Some feature St. Bernard dogs, colorful flowers, and people dancing in traditional Swiss clothing. Swiss cuckoo clocks are specifically sought after for their high quality craftsmanship, delightful music, and of course, irresistible charm.

Products range in quality and price, from 392 to 925 francs for wooden, handmade, pendulum-operated clocks, or a similar version that is battery operated for 365 francs, which are available from most souvenir shops in Zurich, including Teddy’s Souvenir shop at Limmatquai 34, open Monday to Friday 8:30 am to 8 pm, Saturdays 8:30 am to 7 pm, and Sundays 10 am to 5 pm. Teddy’s sells a pendulum operated clock for as low as 32.80 CHF, up to a mechanical 8-day clock with music for 2, 000 CHF.