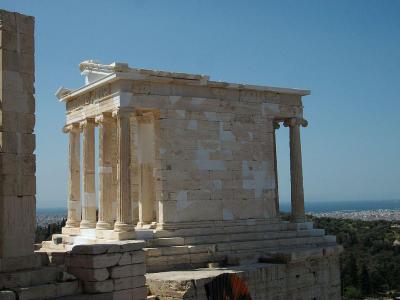 At only 11 feet – or 3.3 metres – in height, this small temple is easy to miss on the Acropolis. It sits atop the rock wall to the right of the Propylaea Gate, and you'll get a good view of it at the upper right as you enter the Acropolis. Destroyed twice in history, it was successfully rebuilt so you can admire its perfect symmetrical architecture with four Ionic columns at each end. A full-scale restoration was completed in 2010, so it looks very much like it would have looked in 420 BC when Athenians worshiped Athena Nike there.

In Greek mythology, Nike was the goddess of speed, strength and victory. Athenians left offerings and prayed that she would help them defeat Sparta in the Peloponnesian War. Unlike other Nike statues which usually had wings, the one at this temple was wingless so that victory could never abandon the city. Looking up, some of the pieces that make the temple's frieze are still there. Fragments of the frieze are exhibited in the Acropolis Museum and the British Museum.

Tip:
Get your multi-ticket pass from somewhere else to skip the queue.
Whichever entrance you go in, exit at the other one (i.e. if you enter from the North Entrance, leave by the South) so you see everything.