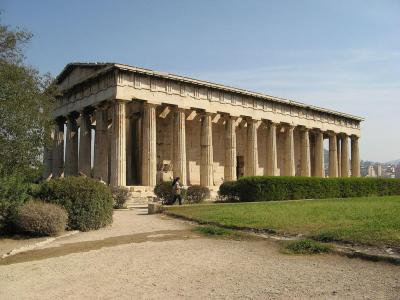 Temple of Hephaestus, Athens (must see)

The temple dedicated to Hephaestus is the best preserved ancient Greek temple, partly because it was transformed into a Greek Orthodox church from the 7th until the 19th centuries. It is located at the north-west side of the Agora, on top of a hill, and really gives a feel of the true scale of an actual Greek temple, due to the structure being basically intact.

In Greek mythology, Hephaestus was the god of fire and metalwork, so he is also described as the god of blacksmiths and artisans. No one but him was able to build the beautiful, indestructible bronze mansions where all the other Olympians lived.

The temple's construction started in 449 BC, and some scholars believe the building has not been completed for some three decades, as funds and workers were redirected towards the Parthenon. According to the “Description of Greece” written by the great Greek traveler Pausanias in the 2nd century AD, the temple housed the bronze statues of Athena and Hephaestos. Trees and shrubs were planted around the temple, creating a small garden. So if you visit, you will have some shady spots as well as great views of other sites from the temple. It is really advisable to get an audio guide as soon as you arrive, as it provides a much better story to the experience.

Why You Should Visit:
Not as enormous as the remains of the Parthenon or the few ruins of the gigantic temple of the Olympian Zeus but it gives a feel of the true scale of these amazing structures, as the structure is basically intact.

Tip:
You can visit this site as part of the Acropolis multi-site ticket, which is highly recommended.
It is really advisable to get an audio guide, as this provides a much better story to the experience.
While you cannot walk inside the structure, you can walk around it to see the decorative frizes that surround it.