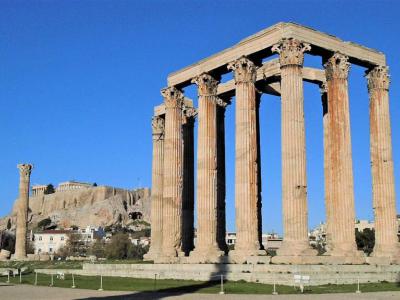 Right behind Hadrian’s Arch, with a clear view of the Acropolis, is the Olympieion, also known as the Temple of Olympian Zeus. Its construction began in the 6th century BC during the rule of the Athenian tyrants, who planned on building the greatest temple in the ancient world. Their plans seem to have not worked quite well, as the temple was only completed some 640 years after, under the reign of Roman Emperor Hadrian, a known admirer of classical Greek culture.

When construction was at last completed, the Olympieion was renowned as the largest temple in Greece, housing a gold and ivory statue of Zeus that was one of the largest in the ancient world. It also had 104 colossal columns of which only 15 remain standing today. The other columns were destroyed by successive conquerors that used them as building material, but also by natural causes such as earthquakes. A 16th column that fell during a storm in 1852 lies near the ruined temple. The ruins extend past the gigantic columns, but you're not always allowed going into the temple as it's still an active archaeological site.

Why You Should Visit:
Although a lot of the temple is missing the sheer scale of the remaining columns and size of the site excites one's imagination. There is also a great photo backdrop with Acropolis in the distance.

Tip:
If you have purchased the Acropolis multi-site ticket you can get into here automatically.