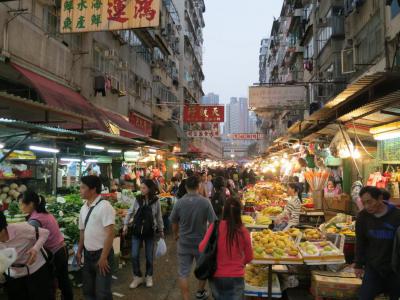 Temple Street Night Market is located in the Jordan area and Yau Ma Tei in the Kowloon district of Hong Kong. The night market and the flea market are well known in this part of the city. Tourists usually flock to these markets during the evenings, so even at dusk the place is crowded. The market has vendors selling food items and cheap merchandise that tourists usually buy.

The Temple Street Night Market was built during the Qing Dynasty and named after a Tin Hau temple present at the location. The market is also known as Men's Street as it has many popular men's fashion outlets.

The market usually opens at 2 p.m. in the afternoon, but it is during dusk that the real crowd gathers here. During the market’s operational hours, traffic is closed on the street. The market has more than a hundred stalls, decorated with colorful lights. The carts and stalls are full of merchandise including mobile phones, watches, clothes, shoes, and men’s accessories. The night market is famous for selling second-hand goods such as videotapes, old newspapers, cassettes, and antiques. Prices can always be negotiated by bargaining. Snacks and roadside treats are also abundant.

Why You Should Visit:
May be a good place to buy some cheap/souvenir items, but there are also plenty of cheap eateries – mostly street foods & authentic cuisine – lining the strip.

Tip:
The further you go inside the market, the cheaper it tends to get.
As for the food, eat where the long lines to buy food are, or at the busiest restaurant(s).
Image by Sengkang on Wikimedia under Creative Commons License.