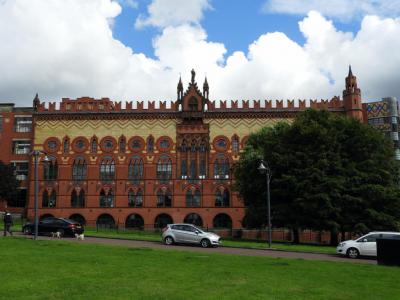 Can you imagine the council allowing a company to build a huge factory in a chic area of your city? No? Neither could the people whose houses overlooked Glasgow Green Park, but Templeton’s Carpet Factory was constructed there in 1892.

There had been weaving sheds on the edge of the park for many years, and James Templeton wanted to incorporate them into a single factory, but the wealthy citizens didn’t fancy the idea and his plans were repeatedly rejected.

Finally he hired William Leiper, a renowned architect and told him he wanted a building that didn’t look anything like a factory. Leiper based his design on the Doge’s Palace in Venice, with an elegant façade of glazed red brick, vitreous enamelled tiling and terracotta.

The construction was well underway when a part of the façade collapsed onto adjoining weaving sheds, killing 29 women working in them. In 1900 a fire destroyed part of the building, killing several other workers and the factory began to gain a reputation for being haunted.

Extension work was carried out during the nineteen thirties and the factory produced double-weave Axminster carpets until it merged with another company in 1983 and the Scottish Development Agency took over the building and turned it into a business centre.

In 2005 the extensions were torn down and a block of flats were built in their place. A section of stonework at the base of the Templeton Gate was inscribed with the story of the façade’s collapse and the names of the women who had died there.
Image by cosmicsmudge on Flickr under Creative Commons License.