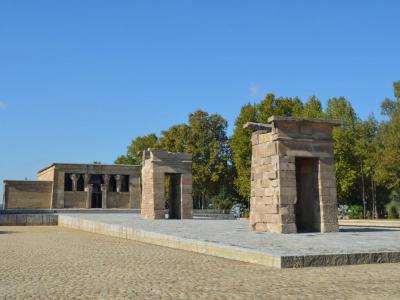 A building one hardly expects to find while visiting Parque del Oeste, near the Royal Palace in Madrid, is an Egyptian temple. But don’t you worry, it's not too much Sangria that you had – the Temple of Debod really does exist! It was constructed during the 2nd century BC in ancient Egypt as a small single chapel dedicated to the god Amun. Later, the temple was enlarged by the pharaohs of the Ptolemaic Dynasty and dedicated to Isis.

In 1960, during the construction of the Great Dam of Aswan in Egypt, several ancient buildings were menaced by flood water. Spain helped with the relocation of the twin temples of Abu Simbel, and in gratitude, the Egyptian government donated the Temple of Debod to Spain. Upon that, the building was carefully dismantled and shipped, first by sea and then by railway, to Madrid where it was reconstructed near a small lake in the park.

The temple has two narrow gateways leading to the central porch with four colonnades. Inside, the West Hall is richly decorated with hieroglyphics. In the room, which is the original chapel, is a photographic documentary of the temple’s history and its journey from Egypt to Spain.

This is the only edifice of its kind in Spain and one of the rare pieces of Egyptian architecture outside Egypt. It is particularly lovely at sunset and in the evening, when it is lit up, reflected in the still waters of the lake and producing the impression of being transported back in time to a long forgotten world where people raised places of worship to their strange gods.

Tip:
Don't take the opening hours too seriously because there's not that much to see inside.
Do bring a mini-picnic with you, so you can laze about like the locals.
Also, try arriving 30 minutes before sunset to see the place transform with the change of lighting.