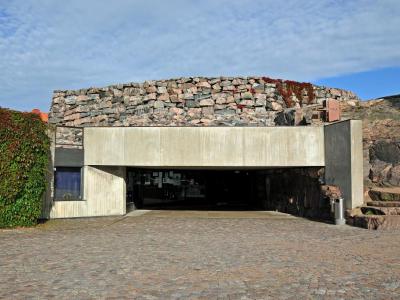 This Lutheran church in the Töölö neighborhood is distinctive. It was built into solid rock in 1969 by sibling architect duo Timo and Tuomo Suomalainen. It's commonly called the Rock Church or the Church of the Rock.

The site here has been selected for a church as early as the 1930s, but World War II interrupted progress on the program. The Suomalainen brother's won an architectural competition to complete the church. The project had to be scaled back from the original vision due to budget constraints, so the final product wound up being about a quarter of the original plan's size. The rock walls were not part of the original plan that won the brothers the competition because they thought it was too radical an idea to be approved.

The interior of the church was carved out of the rock, illuminated by a giant skylight around the large central dome. The shape of the building gives it excellent acoustics, and as a result, it is a popular concert venue. Part of the magic comes from the interior's rough rock walls, which are perfect for reflecting sound. All of the interior furnishings were designed by the original architects. Today, Temppeliaukio is one of Helsinki's most popular attractions.

Why You Should Visit:
Helsinki's architectural wonder; the mix of concrete, granite, coupled with color and copper everywhere (including the roof) make for an inspiring view.

Tip:
Try to see if there are any concerts and enjoy the great acoustics.