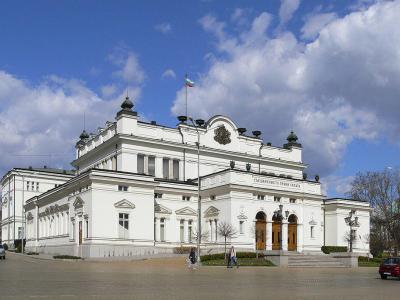 The National Assembly's main building has been proclaimed a monument of culture for its historic significance. Situated in downtown Sofia, it was designed in Neo-Renaissance style by Konstantin Jovanović, a Serbian-Bulgarian architect whose other works include the Parliament of Serbia building. It was constructed between 1884 and 1886 by Friederich Wilhelm Gustav Liebe, a young builder from Saxony who was only 22 years old when construction began.

The building is depicted on the reverse of the Bulgarian 20 leva banknote, issued in 1999 and 2007.

Due to insufficient space in the main building, some administrative offices of the National Assembly are now housed by the former headquarters of the Bulgarian Communist Party, located at the Largo.
Image by Damien Smith on Flickr under Creative Commons License.
Sight description based on wikipedia