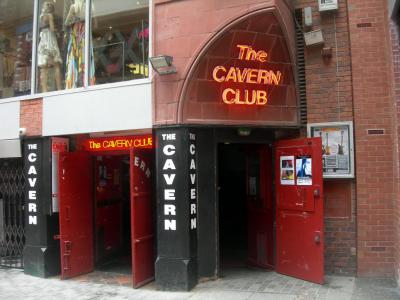 The Cavern Club, Liverpool (must see)

Opened on 16 January 1957 as a jazz club and later becoming a center of Liverpool's rock-and-roll scene in the early 1960s, the Cavern Club became closely associated with the Merseybeat music genre and, famously, regularly played host to The Beatles in their early years, initially as part of the weekday "beat sessions" at lunchtime.

The Beatles made their first appearance at the club after returning to Liverpool from Hamburg, Germany where they had been playing at the Indra and the Kaiserkeller clubs. There and then, on Tuesday, February 9, 1961, they were signed up as the club's resident lunchtime group, working in alternation with Gerry and the Pacemakers. Narrow, cobbled, uneventful Mathew Street thus began to lead an unexpected new life in daylight hours. At noon, Mondays to Fridays, a four-abreast line would begin to form at the Cavern's hatchlike entrance, growing by the minute until it stretched back past the warehouses and delivery trucks and piled-up fruit crates, eighty-odd yards to the junction with Whitechapel. Inside, there was no "security" whatsoever, and no alcohol was sold either at lunchtimes or at night, only coffee and soft drinks.

In the decade that followed, a wide variety of popular acts appeared at the club, including The Rolling Stones, The Yardbirds, The Hollies, The Kinks, Elton John, Black Sabbath, Queen, The Who, and John Lee Hooker.

Even if you're not that bothered about the Beatles, The Cavern is a must-visit experience when in Liverpool. The live music is still brilliant, and the door charge of £2.50 per person after noon is not much to pay for such a historic place.

Why You Should Visit:
To check out the most legendary cellar club on the planet that has been the beating heart of Liverpool’s iconic music scene for over seven decades, visited by millions of people from all over the world passing down its famous stairway.