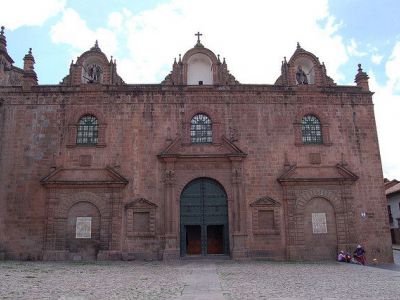 The Church of Triumph, Cusco

The Church of Triumph was built in 1536, just three years after the conquistadors settled in Cusco. At one point, presumably between 1533 and 1536, the Spanish were cornered by a besieging army of Incas, led by Manko Inka. Just as it seemed that they were on the verge of defeat, the Spanish miraculously managed to drive back the Incas. The Catholic conquistadors attributed this victory to Saint James who was reported at the time to have descended from heaven to drive back the Quechua Incas. This improbable victory is why the church is called the Church of Triumph and why there is a statue of St. James atop a horse within the church, depicting him slaying an Inca.
Sight description based on Wikipedia.

Want to visit this sight? Check out these Self-Guided Walking Tours in Cusco. Alternatively, you can download the mobile app "GPSmyCity: Walks in 1K+ Cities" from iTunes App Store or Google Play. The app turns your mobile device to a personal tour guide and it works offline, so no data plan is needed when traveling abroad.