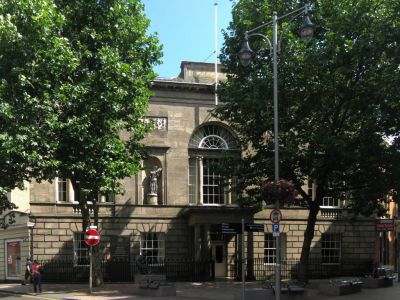 In 1817 it was adapted to become the Judges Lodgings when it passed into the hands of the County Justices, then becoming known as the County Rooms. When it passed into the ownership of Leicester City Council it was renamed again, to The City Rooms. The ballroom which runs the whole width of the building on the first floor is the centerpiece. Decorated with paintings by Ramsay Richard Reinagle and figures in niches on the front of the building by John Charles Felix Rossi, representing the comic and lyric muses. The building has been designated by English Heritage as a grade I listed building.
Image by NotFromUtrecht on Wikimedia under Creative Commons License.
Sight description based on wikipedia