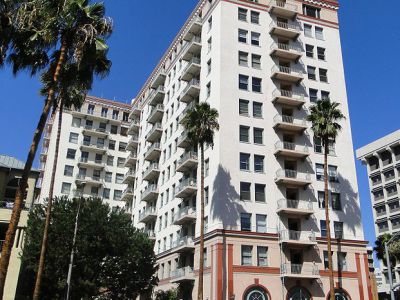 Cooper Arms is a twelve-story steel-reinforced concrete building with exterior walls of brick finished with stucco. The design of the L-shaped apartment building has been described as Renaissance Revival and "Adam Revival" with neo-classical and neo-Egyptian ornamentation. The building's 12th floor solarium and ballroom, occupying a major portion of the top floor, were among its most notable features. The ballroom included a domed ceiling and ornate moldings and lanterns. Another popular feature was the ground-level garden along Ocean Boulevard which opened onto a Spanish loggia extending through the structure to Linden Avenue.

A promotional brochure published in 1922 noted that the Cooper Arms would have the latest amenities, including steam heating, high-speed elevators, "instantaneous hot water at all times," "Iceless Frigidors," "Disappearing beds," and "Dustless roller screens." Cooper Arms was added to the National Register of Historic Places in 2000. It is currently operated as condominiums.
Image Courtesy of Wikimedia and Los Angeles.
Sight description based on Wikipedia.