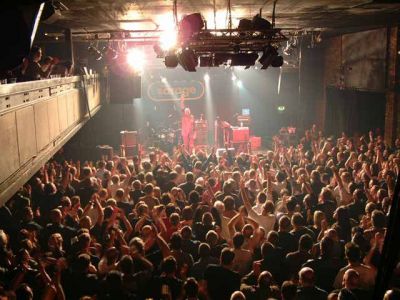 In business for 15 years, this nightclub is one of the top in the city. Many renowned bands and DJs love to play here.

The Garage (formerly known as The Mayfair) is Scotland's largest nightclub. The main hall was the first Locarno ballroom in the UK, although it has since been remodelled by the addition of an extension to the mezzanine level.

The Garage is made up of various rooms which play different genres of music which are all accessed under one roof. The Main hall, the biggest room, plays chart and remixes, G2 plays RnB hits, Desperados bar plays cheesy and nostalgia while the final room The Attic plays indie and rock. There is also a shot and cocktail bar at the back of Desperados bar.

However, only certain rooms are open on different nights of the week. On Friday and Saturday nights the full club is open but on quieter nights through the week only one or two rooms are usually open unless there's a special event.

The main entrance has the cab of a tractor projecting out over the doors to the venue. As a gig venue, it is primarily known as a stepping-stone for bands which are attempting to make their way to the top, which was very similar to the now incinerated O2 ABC Glasgow. The Garage also has rooms available to be hired for public events, Band Room, Lounge, Balcony, Cocktail Bar, Attic and G2. They can cater for over 300 people or provide smaller, exclusive rooms for private parties.
Image Courtesy of Wikimedia and Aniallator19.
Sight description based on Wikipedia.