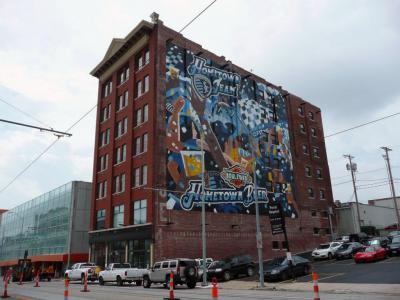 Also known as the Think Big Building, the Globe Building is like many other historic buildings in downtown Kansas City. It would have been demolished, but thanks to forward-thinking city planners and a creative tax credit scheme, businesses can reuse and repurpose historic buildings instead of razzing them. The Globe Building, located in the Crossroads Art District, is now a popular state-of-the-art coworking space. The complex includes glass-walled offices, shared workspaces, and an event venue. All areas have exposed brick walls, original hardwood floors, and wood-beam ceilings to emphasize the building's history.

The building is a seven-story brick affair that is most recognizable by its large painted advertising murals on its north and south faces. It was built in 1902 and designed by architect James Hogg. For the first 75 years of its existence, it was a storage warehouse with commercial offices on the first floor. It sat vacant since the 1970s until it was purchased by the current owners and rehabilitated in 2013.
Image Courtesy of Wikimedia and Mwkruse.