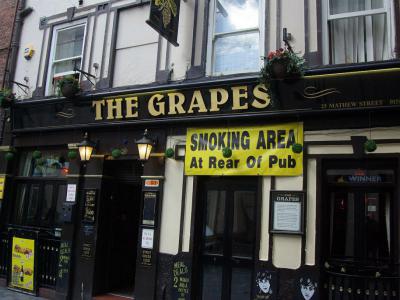 One of the main reasons why British pubs have such peculiar names is that the first pub signs were pictorial, as many of the customers could not read at the time. These were some of the earliest logos – a Roman taberna, for example, was marked by a vine or perhaps a bunch of grapes, and there are plenty of pubs called The Vines, the Grapes or the Bunch of Grapes around, especially in cities associated with the wine trade.

Liverpool has seemingly dozens of Grapes, the best-known probably being the one in Mathew Street, diagonally opposite the world-famous Cavern Club, where the Fab Four used to refresh themselves before or after a gig. They were joined by other bands just off their gigs, as well: Gerry and the Pacemakers, The Big Three, The Searchers and the Swinging Blue Jeans. When the queues of predominantly teenage fans stretched down the street, whatever the weather, The Grapes was guaranteed to be always crowded – particularly as the Cavern was an alcohol-free venue.

Although it doesn't look the same as it did in Beatle days, The Grapes on Mathew Street is clean, has sufficient amounts of comfortable seating available, as well as karaoke. One moment you can be listening to someone strangling animals with their voice and by the very next song feel like you've stumbled upon a singer who might be the next big thing. All the while, people out for the evening are content to just carry on supping their Guinnesses and catching up like it's no big deal.