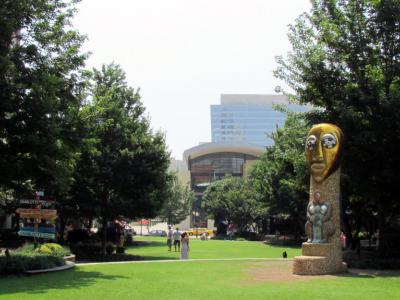 The Green is a pocket park on 1.5 acres near the Charlotte Convention Center. This park is a fun stop on a walking tour of the city's Second Ward.

The Green is notable for its focus on art. Temporary, public art is often on display, particularly in the summer. A number of permanent pieces can be seen throughout the year. With a focus on world literature, The Green offers bronze statues that feature great novels like Roots, Don Quixote and Wuthering Heights.

There are many other public works of art in and near the Green. The Brick Kids - Life is an Open Book features children, made from brick, climbing a brick wall. The Firebird is an 18 foot structure featuring a bird adorned in shards of glass. It is adoringly called "Disco Chicken" by locals. The park also features three fountains shaped like fish that spit water from their mouths during the summer months.

Those visiting Charlotte in the summer may find themselves enjoying performances at the Green during the Charlotte Shakespeare Festival. Other public events, including movie screenings and free outdoor plays, often take place in this park.
Image by David Berkowitz on Flickr under Creative Commons License.