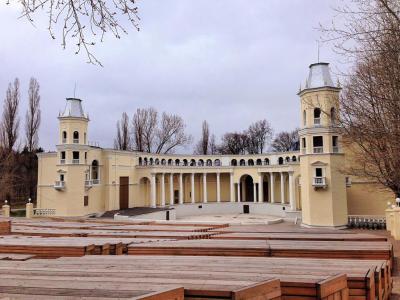 The Green Theatre is an open-air theatre in Baku. The theatre seats 2500 spectators.

The theatre was built in the mid-1960s on the initiative of the city's major of the time Alish Lambaranski. The Green Theatre was built as a venue intended for important cultural events.

In 1993, the theatre ceased functioning. In August 2005, Ilham Aliyev, the President of Azerbaijan ordered to carry out repairs works in the theatre.

On July 25, 2007, Hajibala Abutalybov, the current mayor of Baku, signed a decree on the creation of the Green Theatre Concert Complex of Baku.
Image by Dena Barmas on Flickr under Creative Commons License.
Sight description based on wikipedia