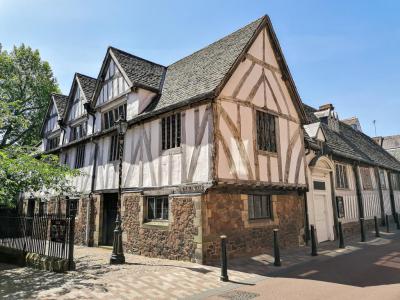 The Guildhall, Leicester (must see)

The hall was used for many purposes, including council meetings, feasts, as a courtroom, and for theatrical performances. The Guildhall was also used for banquets, festivals, and as a home for a priest who prayed for the souls of Guild members in the nearby St Martin's Church. The Guildhall was retained in use until quite late. It was not until 1876 that the Corporation moved to the new Leicester Town Hall. It was later used as a police station and school, before becoming a museum.
Image by stevecadman on Flickr under Creative Commons License.
Sight description based on wikipedia