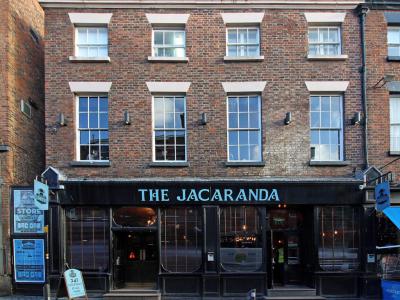 A famed music bar founded by the first manager of the Beatles, Allan Williams, The Jacaranda – or simply Jac – has been an important part of the Liverpool music scene since 1958. Another must-see spot on any Beatles tour, it is the place where the band used to rehearse, play and hang out when they were called The Silver Beetles.

As soon as the four met Allan Williams, they hounded him for a chance to play at the venue. Allan agreed with one condition: they must paint the place. John and Stuart painted the lady's toilets, and the band would start rehearsing in the basement. Without those hours of rehearsal time, it is unlikely they would have become the stars we know today. After a dozen or so performances at Jacaranda, for which they were paid with free drinks, Allan became their manager and booked their first Hamburg tour.

Reopened and refurbished in 2014, The Jacaranda has once again put itself at the epicenter of unsigned music of the city. With the famous open mics on every Thursday and Sunday, there are live bands playing every Friday and Saturday from 8pm.

Upstairs is now home to Jacaranda Records – a distinctly unique concept that combines vinyl, coffee and cake! With vinyl record players sunk into the tables, you can listen to a huge range of music whilst enjoying an incredible range of cocktails and hot drinks selection. The club is also home to a 1948 voice-o-graph machine that records a track directly to vinyl; one of only two in the world open to the public!