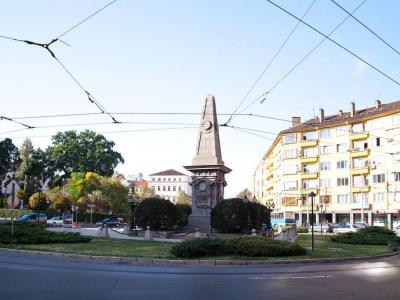 The monument is 13 m high, made of grey Balkan granite and designed by Czech architect Antonín Kolář. The bronze bas-relief of the head of Levski, part of the monument, was created by Josef Strachovský, whereas Italian Abramo Peruchelli did the stonecutting work. It was inaugurated on 22 October 1895, but was planned and worked on ever since the Liberation of Bulgaria in 1878, the construction being hindered by a chronic lack of funds and negligence, and taking a whole 17 years. This ignited a wave of indignation among the Bulgarian intellectuals of the time, with the poet Konstantin Velichkov even branding this carelessness in a 1881 poem.
Image by Psy guy on Wikimedia under Creative Commons License.
Sight description based on wikipedia