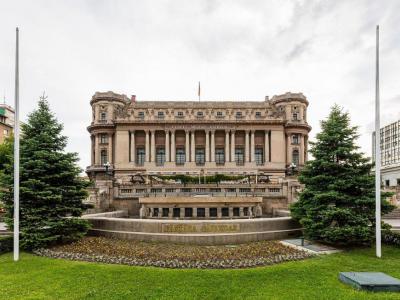 The building of the National Military Circle was designed by Romanian architects D. Maimarolu, V. Stefanescu and E. Doneaud. It was built in 1912 in French neoclassical style and was used to host social, cultural and educational needs of the Romanian army. Now, it is the place were important events, such as art exhibitions and book launching, take place.

The National Military Circle contains numerous reception halls and meeting rooms, a theater, a bookshop, and art galleries. The Marble Hall is known to be one of the most successful achievements of the Romanian architecture. Its decorative elements are of ancient style that bring you back to the bygone era. The stunning collection of swords, stilettos, shields, spears, helmets, and arrows creates a true military environment. Another impressive hall is the Byzantine Hall which takes its name from the Byzantine style it bears with specific elements of the Romanian traditional art. Its dominant component is the row of arches that support the ceiling. After the renovation of the hall, some mural paintings - representing images of the leaders of independent Romania - have been added.

Some other outstanding halls of the National Military Circle are the Maura Hall, the Gothic Hall, and the Norwegian Hall.
Image by Andrei AIR on Flickr under Creative Commons License.