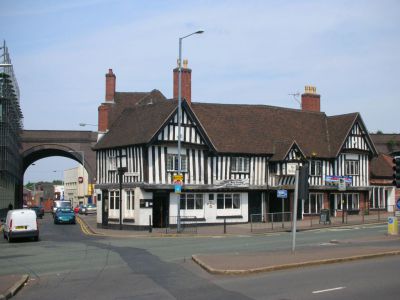 The Old Crown pub in Deritend is one of the oldest extant secular buildings in Birmingham, UK. Reportedly, this listed historic structure has been in place since 1368, retaining its "black and white" timber frame, although nearly all of its present self is believed to date back between 1450 and 1500, with some evidence dating to 1492.

It is thought to have been originally built as the Guildhall and School of St. John, Deritend. Described as a tenement and garden, running alongside Heath Mill Lane, the building was purchased in 1589 by John Dyckson, alias Bayleys and remained in the Dixon alias Baylis (later Dixon) family for the next hundred years.

The earliest documentary evidence of its use as an Inn is from 1626; and it being "called by the sign of the Crowne", from 1666. The property was converted into two houses in 1684 and then split into three in 1693. It remained three houses until the 19th century. That same century, the Old Crown was saved from demolition three times: in 1851, 1856, and 1862.

When built, the original structure had a central hall and a courtyard in the back, with a well. The latter was 26 feet (8 m) deep and surrounded by large stones. The well was cleaned up in 1863 and an iron gate was added to the top of it to preserve it while keeping it accessible.

In 1991 a local pub company bought the Old Crown and eventually had it restored to its former glory and reopened.
Image by Oosoom on Wikimedia under Creative Commons License.
Sight description based on wikipedia