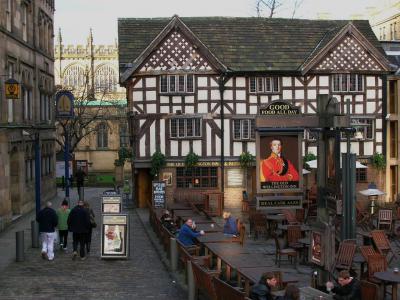 This unique half-timbered pub in Manchester city centre, steeped in history, has been around since 1552. Originally built next to the Market Square, on what is now Market Street, the building was moved 300 metres (980 ft) from its original site towards Manchester Cathedral, to form Shambles Square, as part of the redevelopment programme completed in 1999.

Nicknamed ‘The Old Welly’, this is the oldest building of its kind in Manchester and, in 1554, is was made part of the draper's shop, owned by the Byrom family. It was here that in 1692 the writer John Byrom, inventor of an early form of shorthand, was born. In 1830, the building became a licensed public house, first known as the Vintners Arms, and later the Kenyon Vaults. By 1865, the ground floor of the building was taken up by the Wellington Inn, while the upper floors were used by makers of mathematical and optical instruments. In 1897, the upper floors accommodated a fishing tackle shop, which was called very much so – "Ye Olde Fyshing Tackle Shoppe".

In the 1970s, along with the Old Shambles, the Inn was raised by 1.4 metres. In the aftermath of the 1996 Manchester bombing which left the building damaged and took nearly a year and £500,000 to repair, it was decided that it should be dismantled and rebuilt anew nearby. Today, The Old Wellington delights visitors with a rich choice of great pub food, real ales and exciting range of premium gins. If all this sounds like your kind of fun, make sure to pop in and check out this ancient monument of a pub, while in Manchester!
Image by Poliphilo on Wikimedia under Creative Commons License.