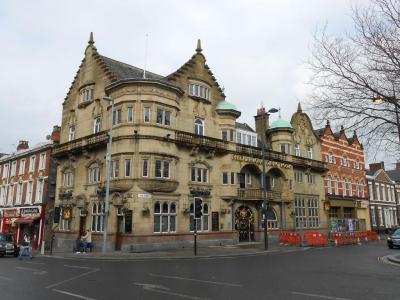 If you're looking for somewhere in Liverpool to grab a drink or a bite to eat, you won't find a more lavish setting for a quick pint than the Philharmonic Dining Rooms. Built in 1900 and a public house for its entire existence, the Phil (as it's known locally) is recognized as one of the most spectacular pubs in the UK. Specializing in fine wines and real ales from Scotland, it stands on the corner of Hope Street and Hardman Street, diagonally opposite Liverpool's Philharmonic Hall.

One of several public houses added to the city in Victorian times, the Phil stands out due to its unusual exterior, with an apparently random series of bay windows and lofts, all rendered in ashlar stone. The interior boasts wood paneling to rival any ﬁrst-class saloon on the great transatlantic ships, while gentlemen's urinal stalls are carved from a very rare type of rose-colored Irish marble. The Grade II listed pub's main entrance is surrounded by a black and gold wrought iron gate, designed in the Art Nouveau style by H. Bloomfield Bare.

****BEATLES PUB CRAWL WALK****
Another of John Lennon's favorite pubs during his youth; in fact when asked about the price of fame, he once quipped, "Not being able to buy a pint at the Phil". As for Paul McCartney, he performed here both as a young musician and during an impromptu concert in 2018.