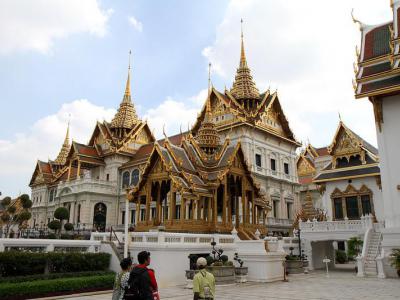 The Royal Grand Palace, a building complex in Bangkok, served as the official residence of the Kings of Thailand from the 18th century onwards. King Rama I ordered the construction of a magnificent new Palace in 1782 when he moved the capital from Thonburi to Bangkok. The chosen area was, however, occupied by Chinese merchants whom he asked to relocate. The Palace has been constantly expanded and many additional structures were added over time.

Originally the palace consisted of several wooden buildings surrounded on four sides with a high defensive wall, 1900 meters in length and enclosing an area of 218,400 square meters. The Palace is rectangular in shape with the western side next to a river, the royal temple situated to the east side and all structures facing north. The King ordered the construction of the Temple of the Emerald Buddha as a royal temple and as his personal place of worship. Around the turn of the 20th century, Thai Kings stopped living in the palace. Today, the palace is used for all kinds of other ceremonial and auspicious happenings including royal funerals, marriages and state banquets.

The palace is divided into three quarters: the outer quarters, the middle quarters and the inner quarters. The Outer Court housed the government departments in which the king was directly involved including civil administration, army, and the treasury. The Temple of the Emerald Budha takes up one corner of the complex next to the outer court. In the middle is the Central Court, where the residence of the king and the halls for conducting state business were located. Behind the central court was the inner court where the king's royal consorts and daughters lived. It was like a small city entirely populated by women and boys under the age of puberty.

The Grand Palace with its beautiful architecture and intricate details is living proof of the creativity and craftsmanship of Thai people. Today, the complex remains the spiritual heart of the Thai Kingdom. The Grand Palace with the Temple of the Emerald Buddha is Thailand's most sacred site. All visitors must be properly dressed before being allowed entry to the temple. No bare feet and no see-through clothes are allowed.

Definitely the city's most famous landmark, the dazzling and spectacular Grand Palace is one must-see sight. Your visit to Bangkok would not be complete without visiting it.

Tip:
Come early – the place gets quite crowded around 12pm.
They offer free English tours at 10am, 10:30, 1pm, 1:30pm or an audio guide for other languages (200 THB).
Entry fee is 500 THB, which includes the ticket to a theater play (like a Thai musical). Pick-up and drop to the theater from the Grand Palace are also included.