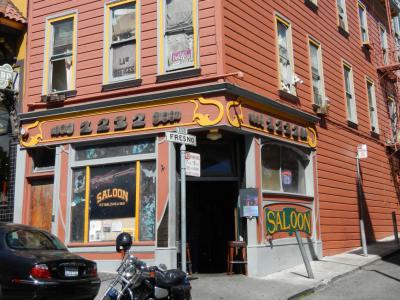 The Saloon, located on Grant Avenue in North Beach, is currently the oldest saloon of San Francisco that offering dancing and live music. The Saloon first opened in 1861, and has been in continuous operation ever since. This drinking establishment was originally owned by Ferdinand E. Wagner, the son of a liquor merchant in Studweiller (Bas Rhin, France), who named it Wagner's Beer Hall.

The building looks very much the same as it does in photographs from the 1870s. The elaborate wooden bar which is currently in use was installed in the 1860s, and was constructed outside of America and later shipped to San Francisco.

In the late 1960s and 1970s Grant Avenue had numerous blues clubs like The Saloon, which supplied live bands playing music every night. Though many of those blues clubs have disappeared, The Saloon continues to provide a dance floor and daily performances by locally acclaimed musicians. Despite its small size, throughout time The Saloon has attracted the performances of many talented and occasionally famous musicians.