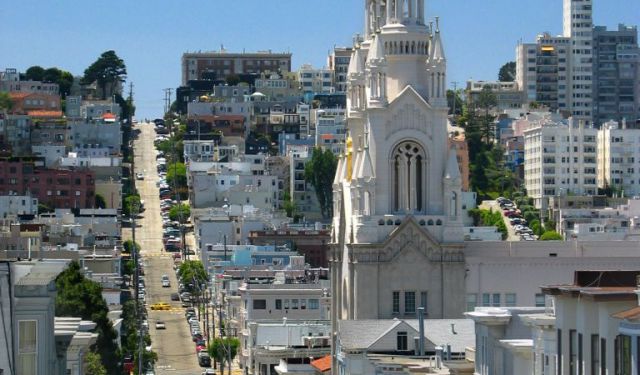 Image by Daniel Schwen on Wikimedia under Creative Commons License.

North Beach is one of the oldest neighborhoods in the city, known as San Francisco's Little Italy. This fun area features a great mix of architecture, museums, restaurants and old shops. Take this tour to explore the beauties that North Beach has to offer.
How it works: Download the app "GPSmyCity: Walks in 1K+ Cities" from iTunes App Store or Google Play to your mobile phone or tablet. The app turns your mobile device into a personal tour guide and its built-in GPS navigation functions guide you from one tour stop to next. The app works offline, so no data plan is needed when traveling abroad.

Jackson Square is the north-eastern region of the formerly known, Barbary Coast in San Francisco, California. Barbary Coast was then notorious for the crime and prostitution prevalent in the area. Today, Jackson Square is the oldest commercial district of modern day San Francisco. The area was constructed on a fill site containing wreckage from abandoned ships, which are believed to still lie beneath the ground. Buildings in this part of the city were made out of brick and ornate iron in the 1850s. The three-story buildings which are seen even today are reminiscent of San Francisco during the Gold Rush.

Although it retains some buildings of those times, modern-day Jackson Square is very different. The area has now become the ‘interior designer’s district’. Today, one can find English style furniture of the 18th century, antique carpets, 19th-century French paintings and even 21st-century modern designs in the same area. Jackson Square is now famous for art antiques. One can take walking tours to revisit the history of the area and galleries of Californian art and European posters. You can also buy furnishings and wall coverings from highly reputed dealers in this region. If hungry, Jackson Square can offer you some of the finest restaurants in the neighborhood.

Image by LFL16 on Flickr under Creative Commons License.
Sight description based on wikipedia
2

Also known as the Sentinel Building, the Columbus Tower had work on it started in 1905 with directions and money pouring in from Abe Reuf, a lawyer and politician of San Francisco. The earthquake of 1906 and the fire that followed just left the steel framing of the building. The edifice was completed in 1907 with a copper cladding, and the top floor housing Reuf’s offices. Reuf himself, however, was convicted of bribery in 1909 and given a 14-year sentence. By the time he was released, the copper had oxidized and the building had turned green as we see it today.

Legend has it that the Caesar salad was first served at a restaurant called ‘Caesar’s’, located in this building, which was closed down in accordance with the Eighteenth Amendment of the United States Constitution in 1919. In the 1960s, ‘The Kingston Trio’ owned the building and recorded their songs in the studio they built in the basement. By the 70s, the building had started to fall apart, when Francis Ford Coppola, director of Godfather movies, came to its rescue. Coppola bought the building, renovated it and set up his American Zoetrope studio in here. Columbus Tower is landmark number 33 on the list of San Francisco landmarks, and also has a bistro called Zoetrope Café that sells wine from the Napa Valley.

Image by BrokenSphere on Wikimedia under Creative Commons License.
Sight description based on wikipedia
3

Located on the Broadway Street, the Beat Museum is more of a cult museum. A visit to this museum is the same as traveling back in time to the age of the Beat movement. From personal belongings of the heroes of the movement to the perception of the society, as seen from newspaper cuttings, you can find it all under one roof, only at Beat Museum.

Earlier located on Californian Coast between Big Sur and the city of San Francisco, the museum was relocated to the birthplace of the Beat Movement, the North Beach area. It was here in 1955 that Allen Ginsberg first read ‘Howl’. Other Beat writers like Lawrence Ferlinghetti and Jack Kerouac made North Beach a platform for free speech. Other than the memorabilia of the movement like posters, artwork, books and Kerouac’s tweed jacket, the museum tells you about the movement's begining, its significance, the arrest of Ferlinghetti, the Howl Trial and what happened to the women who participated in the movement. To top it off, the museum also houses Ginsberg’s copy of Howl, which he had sent to other writers for review. It also shows you how the movement was influenced by events like space programs, demands for gay rights etc.

You can also collect your own piece of San Francisco history in the form of souvenirs like T-shirts, sweatshirts, books, CDs, posters, artwork from the gift shop and make your visit truly memorable.

Image by <<graham>> on Flickr under Creative Commons License.
4

San Francisco, earlier known as Yerba Buena, was a sparsely populated place in California. With less than 500 residents, the area was far from any importance or popularity until the year 1849. That year saw the beginning of the Gold Rush and the news spread like wild fire attracting people from far and wide.

People started pouring into the city to grab a bite of gold and within no time the population of San Francisco quadrupled. However, with the growing population there was no place of worship in the newly habited areas. The Catholics had to walk over three miles to the docks just to attend their daily mass at church.

A new committee was then formed to tackle the issue and the first church that was erected was built in the honour of Saint Francis of Assisi after whom the city was christened San Francisco. Built on the North Beach adjoining San Francisco, it was commissioned on the 12th of June 1849. The first mass took place here five days later on 17th of June. The Church was later officially declared the National Shrine of Saint Francis of Assisi. It now contains the relics of Saint Francis, Saint Clare and Saint Anthony of Padua and is no longer under the parish.
Image by Brian Turner on Flickr under Creative Commons License.
5

Since 1946, Biordi Art Imports has been mesmerizing everyone with its array of polychrome ceramics. It features shelves lined with brightly hand painted Ceramics and a museum-like attraction. Visitors will find there Italian Renaissance style Maiolica: exquisite objects d'art finely crafted, dinnerware handsomely hand painted, unique decorative accessories and much more.

North Beach Museum is a free-of-charge history museum. It features historical artifacts that tell the story of North Beach, Chinatown, and Fisherman's Wharf. The museum also displays an amazing collection of photos of the 1906 earthquake and fire, of some of the first Chinese and Italian immigrants and child-sized shoes made for a Chinese woman's bound feet.

In the centre of the park is a small bronze statue of Benjamin Franklin which was donated in 1879 by the first millionaire of San Francisco, Henry Cogswell to honour the fire fighters of the city of San Francisco. An interesting fact is that when the statue was erected at the site, a time capsule with Henry Cogswell’s belongings was also buried. It was excavated a century later in 1979 and was replaced by a new time capsule will be opened in 2079.

The park is a favourite spot for the locals who come here to do tai-chi, walk their dog or just relax.
Image by john w on Flickr under Creative Commons License.

It would be a pity to leave San Francisco without having explored its specialty shops and bringing home something truly original. We've compiled a list of gifts and souvenirs, which are unique to San Francisco, that a visitor might like to purchase to reflect their visit.

The unmatched beauty of San Francisco combined with its riches of instantly recognizable structures and locales has attracted filmmakers from around the world for over 100 years. San Francisco has provided and continues to provide the backdrop for some of the most famous movie
scenes ever filmed. It is almost impossible to traverse the sights of San Francisco without conjuring an image from a...  view more

Fisherman's Wharf neighborhood is home to world-class entertainment opportunities in San Francisco. The historic tourist attractions make the area a popular place to visit. Fisherman's Wharf is an important center of the city's historic fishing industry. Take this walking tour to explore the most visited sights in Fisherman's Wharf.

Bursting with popular tourist attractions and diverse neighborhoods, San Francisco is considered to be a "wonder to behold". Full of museums, religious buildings, parks and amazing architecture, this city can keep any tourist busy for his entire trip. Take this walking tour to explore San Francisco's most visited tourist attractions.

Home to some of the most exciting clubs and bars found the world over, the Nightlife Tour in San Francisco features a wide selection of hot spots to dance the night away. Being a major metropolitan area with a diverse community, the range of musical flavors available here is truly astounding. Whether looking for top DJs or big name music acts, or just a solid local talent spinning your favorite...  view more