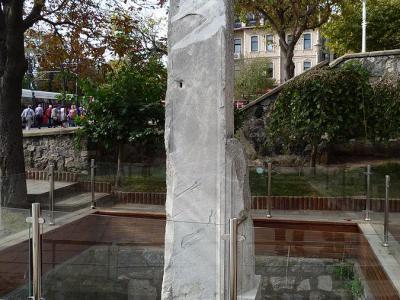 The Stone of Million, Istanbul

The Stone of Milion is all that remains of the 4th-century triumphal gate that served as the Byzantine zero-mile marker. Consciously emulating the Golden Milestone (Milliarium Aureum) in Rome's Forum, it was considered as the origin of all the roads leading to the European cities of the Byzantine Empire, and on its base were inscribed the distances of all the main cities of the Empire from Constantinople.

The monument was actually much more complex than its Roman counterpart: a double triumphal arch surmounted by a dome, which was carried by four arches and crowned by the statues of Constantine and his mother Helena with a cross, looking towards the east, between them. A statue of the Tyche (presiding tutelary deity) of the City stood behind them.

Until the late 19th century, the zero meridian was considered to have passed through Istanbul, where there were Milion Stone once stood; therefore, many countries around the world set their clocks to Istanbul's time. In fact, the maps were prepared based on this point and directions were found here. At the 1884 International Meridian Conference, however, the "common zero of longitude and standard of time reckoning throughout the world" was moved from Istanbul to Greenwich.
Image Courtesy of Wikimedia and Derzsi Elekes Andor.