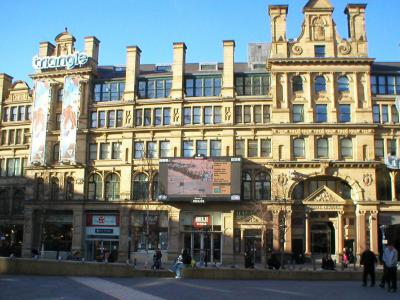 The Triangle Shopping Centre is housed in an Edwardian building on Exchange Square, in Manchester’s regenerated Millennium Quarter. There has been a commercial centre standing on this spot since 1837, when the first trading floor opened. The triangular building that contains the shopping centre was built in 1897, and opened its doors as a Corn Exchange in 1903. Like the nearby Royal Exchange, the building was a thriving centre for the trading of goods in Depression era England, and contributed to Manchester’s growth as the industrial and commercial centre of the region.

After World War 2, the building fell into disuse, before becoming a bohemian flea market in the 1970s.

The building became well known for its alternative stores selling clothes and jewellery, as well as a range of cafes. Bomb damage from the IRA blast in 1996 led to extensive regeneration, and caused a great number of these shops and stalls to be relocated. Now refitted with a modern interior inside the listed Edwardian frontage, the building is home to a number of designer outlets. Famous brands like Adidas, Muji, O’Neill and Jigsaw have stores within the centre, and it is also home to local radio station Galaxy Manchester.
Image by Wendy Mann on Flickr under Creative Commons License.