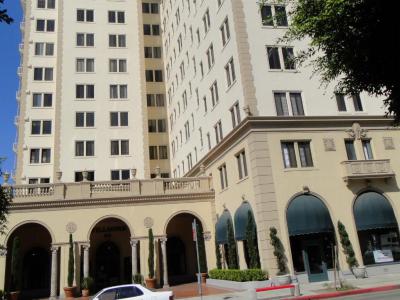 The Willmore is an 11-story historic landmark in Long Beach. Located at West 3rd Street, the building was completed in 1925 in an L shape with a ten-story west wing and an eleven-story north wing. The building was designed in Italian Renaissance Revival style and was originally home to a luxury apartment hotel. The elegant lobby has high ceilings, classic columns and a beautiful, stately cast stone fireplace.

Initially known as Stillwell, the building was renamed to honor William Willmore, the man who started the city’s development in 1882. Back then the city was known as Willmore City. It wasn't until 1888 the residents of Willmore City renamed their town Long Beach, after after its long, wide sandy beaches, and the incorporated city in the same year.

Nowadays the building houses condominiums, a restaurant situated on the first floor, and a solarium on the top floor with with a sweeping view of downtown Long Beach. The building has been listed on the National Register of Historic Places since May 20, 1999.
Image Courtesy of Wikimedia and Los Angeles.