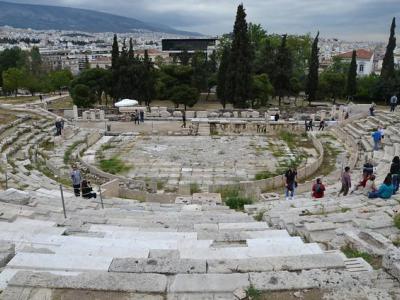 Theater of Dionysus, Athens (must see)

The theater of Dionysus is one of the earliest surviving theaters of classical Greece and is known as the birthplace of European theater. As such, it's a great opportunity for both theater lovers and kids to get a feel for what ancient theater must have been like. While you can't climb all over it, access is nicely provided to walk all around the perimeter of the stage and to sit in the seats, which is a great way to make history come alive.

Around 500 BC, the theater was erected near the Acropolis for the performance of plays, which were a popular form of entertainment in ancient Greece. The location chosen was near the temple of Dionysus, the God of wine and the patron of drama. Like all the major ancient Greek theaters, the shape of the stage was semicircular and the gallery could seat 25,000 spectators. The theater had fallen into and remained in disrepair until the Roman Emperor Nero ordered its restoration and renovation.

The first drama by classical playwright Thespis from whom the word Thespian was coined, was performed at the venue in 530 BC. Plays of classical Greek dramatists like Sophocles, Aristophanes, Aeschylus, Euripides and Menander were subsequently staged. These well known classical dramatists often competed for a prize awarded for the most popular among plays. Serious Greek tragedies that propounded philosophy in the form of a drama, as well as light popular plays, were also staged at the theater.

Why You Should Visit:
Great opportunity for theater lovers, students and kids to get a feel for what ancient theater must have been like.
While you cannot climb all over it, access is nicely provided to walk all around the perimeter of the stage and to sit in the seats, which is a great way to make history come alive.

Tip:
Access to this site comes either separately or with your Acropolis/Ancient Agora/Temple of Zeus Combo Ticket (well worth the investment).