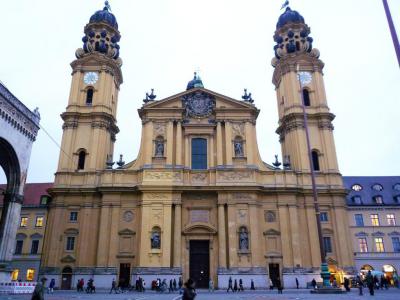 The Theatine Church of St Cajetan is a Rococo structure that was the first Baroque style religious building in Munich. It was originally built for the order of Theatines from Italy.

The Theatine church was commissioned in 1662, by the elector, Ferdinand, and his consort, Henriette Adelaide of Savoy to give thanks for the birth of their long-awaited son and heir Max Emanuel. It was designed by the Italian architect, Agostino Barelli on the lines of the Sant'Andrea della Valle Church in Rome. The church is clad almost entirely in white stucco giving it a bright, airy Mediterranean appearance.

The design of the Theatine Church later influenced the architecture of many churches in Southern Germany. The original architect, Agostino Barelli was succeeded by another Italian, Enrico Zucalli, who designed the 71-meter high dome and two 70 meter high towers. The rococo façade was designed by François de Cuvilliers and his son in 1738. The interior stucco decorations were by the Italian sculptor Nicolo Petri and the statues were made by Germany’s Wolfgang Leutner. The great black altar was designed by Andreas Faistenberger. The crypt of the Theatine Church holds the graves of Max Emanuel and his parents and a small chapel within the church holds the graves of King Maximilian II and his consort.

Why You Should Visit:
There are a number of churches with fascinating interiors in Munich, and this one stands out among the others - the white interior.
The white marble with beautiful ornate work is very beautiful in natural light, while the exterior is famous for its yellow color and rococo style.
Free to enter and nicely air-conditioned – a great spot for a break on a hot summer day.

Tip:
You can conveniently visit this church before or after spending time at Residenz nearby.

Kreuzviertel is one of the four quarters of Munich Alstadt. Historically here was located the centre of the clergy as there was a particularly high number of monasteries. Take this tour to admire the beautiful palaces and churches located in this area, and explore interesting shopping spots and museums.