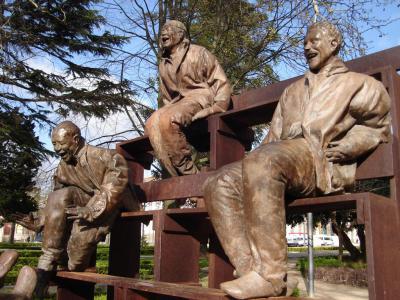 "Thirteen Laughing at Each Other" Statue, Porto

When it comes to sculptural attractions, Jardim da Cordoaria – commonly regarded as one of the prettiest parks in Porto – stands really tall among other public parks in the country and further afield. In large part, this is due to the presence here of the so-called "Thirteen Laughing at Each Other" (known in Portuguese as Treze a Rir uns dos Outros), a collection of four sets of bronze and steel benches distributed throughout the garden, with a total 13 figures of men thereupon.

Utterly captivating and totally at home in the park setting, these almost life-size sculptures depict various individuals, all with the same expression of a hilarious laugh. Each figure – two or three of them per bench – shows a different pose. One figure is lying upside down – whether pushed over or fallen by himself, rolled over with laughter, it is not known. What is known is that the sculptural ensemble was created by Juan Muñoz, reportedly to commemorate the liberal freedom fighters executed in this park, back in 1829.

Whether true or not, you can ask these ageless men yourself, whenever out for a walk in Jardim da Cordoaria; or else just sit next to them and take a funny photo, or have a good laugh.
Image Courtesy of Wikimedia and Neva Micheva.

Tour Duration: 2 Hour(s)
Travel Distance: 3.9 Km or 2.4 Miles
Where To Stay in Porto, Portugal - Guide of Best Areas and Hotels