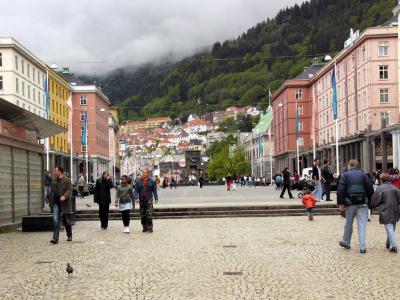 The old days are not missed so much in Bergen, Norway. The city had a lot of wooden buildings, close together and narrow streets. Fires would break out with alarming regularity. Flames easily roared from one house to another, leaping across streets and engaging whole neighborhoods.

Something had to be done. The answer was "allmenninger", or rebuild vulnerable districts. Widen the streets and create squares between districts to stop the spread of fires. Torgallmenningen is Norway's "best designed town square."

It is near impossible to move around Bergen and not cross Torgallmenningen once or twice. Shops and malls line the square. Roofs of glass before the store facades protect shoppers from the all too frequent rains.

The Maritime Monument, with statues of Norwegian sea rovers, is at one end of the Square. These hardy sailors get no protection from the rain, but they don't mind. After all, it's only water.

"We'll meet at the blue Stone" is an expression often heard in Bergen, The Blue Stone is just that; a large blue stone that casts a spell. It is located at the intersection Of Torgallmenningen and Ole Busll Plass. It's a great place to meet.
Image by Fingalo on Wikimedia under Creative Commons License.