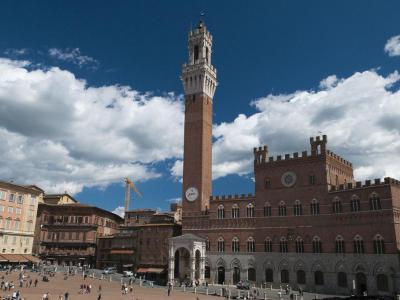 The Mangia Tower is adjacent to the Public Palace. When the tower was completed, it was the tallest structure in Italy. The tower was built to be exactly the same height as the Siena Cathedral as a sign that the church and the state had equal amount of power. Literally meaning "Tower of the Eater", the name refers to its first bell ringer, Giovanni di Balduccio, nicknamed "profit eater" for his spendthrift tendency or his idleness or gluttony.

The Mangia Tower was built between 1338 and 1348. The upper part was designed by the Sienese Byzantine style artist Lippo Memmi. In 1352, a loggia, dedicated to the Holy Virgin, made of marble with a wooden ceiling, called the Cappella di Piazza, was added by the Sienese survivors of the Black Death. In 1360, a clock was placed in the tower. The present pilaster was a restoration, made in 1378, and the sculptures on the pilaster were carved between 1378 and 1382.

The wooden ceiling of the loggia was replaced with marble between 1461 and 1468. The medieval structure served as a watchtower to warn the citizens of enemy attacks. The design has inspired later many towers located in the UK and the USA. The Mangia Tower is 88 meters high. It is a brick structure with a stone bell hall at the top. A bell, weighing 6,764 kg, was placed here in 1666. A winding staircase, consisting of 400 steps, takes visitors to the top of the tower where they can take in breathtaking views across Siena.
Image by Michal Osmenda on Wikimedia under Creative Commons License.