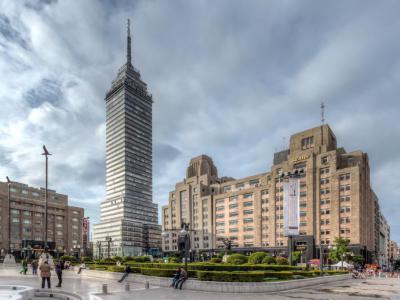 The iconic Torre Latinoamericana was the capital's tallest building at its inauguration in the 1950s. Though it long ago lost that distinction, the old New York-type building is still the only skyscraper downtown, giving its top floors one of the most privileged vantage points in the city – worth the time (and vertigo) to visit.

On the building's 44th floor, an open-air observation deck affords tremendous, panoramic views of the city in every direction. On clear days, the snow-capped volcanoes Iztaccíhuatl and Popocatépetl may even be visible to the southeast. If you're feeling a little vertigo, take heart: The tower was specially designed to withstand Mexico City's seismic instability and soft topsoil, with a foundation reaching deep into the earth and a flexible structure that sways with ground movement. Indeed, the Torre Latinoamericana survived the 1957 (7.9), 1985 (8.1), and 2017 (7.1) earthquakes.