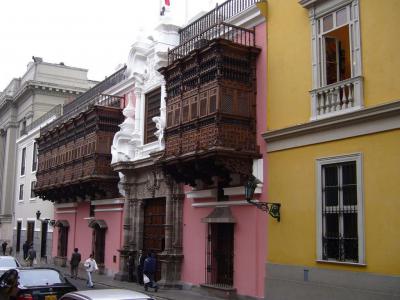 The Torre Tagle Palace is a prominent Spanish Baroque mansion in downtown Lima, built in the 1730s. Today, the palace serves as the residence of Peruvian Foreign Affairs Minister and is heavily guarded by security forces armed with sophisticated weaponry and intensely monitoring the premises.

The palace boasts a nicely decorated façade with two elegant, dark color, wooden balconies done in a typical Lima style of architecture, wherein one balcony is bigger than the other. The building itself is a blend of styles, featuring colonial Spanish porch and patio, fine intricate wooden carvings on the pillars and across the ceilings - in keeping with Peruvian tradition, and the tiles showing a combination of Limeno and Moorish influences.

On the patio’s left hand corner is a set of scales that were used by merchants in the colonial period. Also on the premises is a beautiful, huge carriage of the sixteenth century. In the past, this palace was known to shelter outlaws as the law enforcement agents were not allowed in without a written and stamped authorization. Now that the system has changed, anyone can visit the palace and the best time for that is afternoon. You will simply adore this place, particularly if you have the passion for cultural flavors and architectural craftsmanship.
Image by Imanolnol on Wikimedia under Creative Commons License.