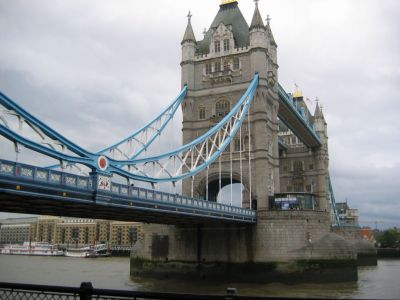 The Tower Bridge is a combined suspension and bascule bridge. It was finished in 1894. It was designed by architect Horace Jones. Engineering was by John Wolfe Barry. The bridge is managed by Bridge House Estates, a non-profit founded in 1282. The bridge was opened in 1894 by Edward, Prince of Wales and Alexandra, Princess of Wales.

The bridge is 800 feet long. It has two 213 foot high bridge towers. The towers are joined on the upper level by two walkways. On the lower level is the roadway; two bascule leaves that can be raised. The twin towers, upper level walkways and the engine rooms form the Tower Bridge Exhibition. The exhibition is open to public tours.

The Tower Bridge Exhibition uses films, photographs and interactive means to show how the Tower Bridge was built. Visitors can access the original steam engines once used to raise and lower the two bascules. There is an admission fee. Entrance is in the northern tower. A lift or elevator ascends to the upper level walkways.

Parts of the walkways have been fitted with glass floors. Look down at the river, a giddy 143 feet below one's feet. Or not.

Why You Should Visit:
Unique and majestic structure; amazing to see especially at night! Great view and a glass floor on the high-level walkways that is really quite cool.

Tip:
If you're lucky enough, you could see the bridge open up to let the barges/ships pass by. Don't skip the engine room, which is very educational as to how the bridge operates.